Paw Patrol: The Dogs of Denali 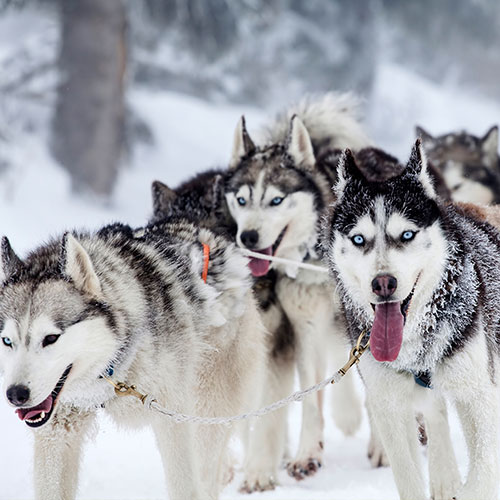 Denali National Park and Preserve is home to some of North America’s most precious geological features—an incredible array of wildlife, hundreds upon hundreds of flowering plant species, trees and grasses, all surrounding Denali itself—the highest peak in North America.

This national treasure draws over 400,000 outdoor enthusiasts and adventurers annually, and while the endless natural wonders within the park are the largest draw, some of its furry employees contribute significantly to the allure.

We don’t mean a heavily bearded “Ranger Rick” breaking trails or felling trees in front of captivated crowds. The park’s most famous workers are teams of Alaskan huskies that have quickly become a must-see favorite.

The Denali dog kennels buzz and bark with action all year long.
In the peak months, from mid-May through mid-September, the National Park Service says they serve as “…furry ambassadors, helping people understand what it means to travel in the Alaskan wilderness.”

Daily demonstrations feature an Alaskan history lesson featuring kennel staff with dogs in tow. More than just poster pups for the third-largest national park in the U.S., these tenacious canines are among its most valuable work force and really earn their keep in the winter months.

Since the entire Denali wilderness was officially deemed a national park in 1917, sled dogs have been the essential mode of travel for all those who visit and work within the park.

Aside from Denali Park Road, the only thoroughfare inside the park, there are no roads and mechanical vehicles are limited. Providing food, water, supplies, and materials to everyone working or researching within the park would be impossible without the help of these K-9 crusaders.

When the Wilderness Act of 1964 was passed, making the already strict rules about limiting vehicle access and human influence permanent, the Huskies’ long-term job security was sealed.

Besides being extraordinary couriers, the paw patrol also helps rangers build trails and maintain the park by keeping the expansive trails pristine for outdoors enthusiasts such as cross-country skiers and dog mushers. It’s just one of the many reasons Denali National Park is such a sought-after destination.

The huskies help maintain the environment in other ways too. During the 50th anniversary of the Wilderness Act, Denali’s dog teams traveled to the neighboring Gates of the Arctic National Park to retrieve old oil barrels left by the Department of Defense over half a century ago.

Twenty dogs and two kennel staff sledded over 90 miles in the blistering cold to remove the unwanted barrels so they could be disposed of properly and the National Park Service documented their journey in a short film.

Denali National Park and Preserve is a majestic landscape full of natural wonder for adventurers young and old. As pet lovers, we can truly appreciate these beautiful “workhorse” dogs and the valuable services they provide. If nothing else, Denali’s furry denizens should move the park to the top of your bucket list.